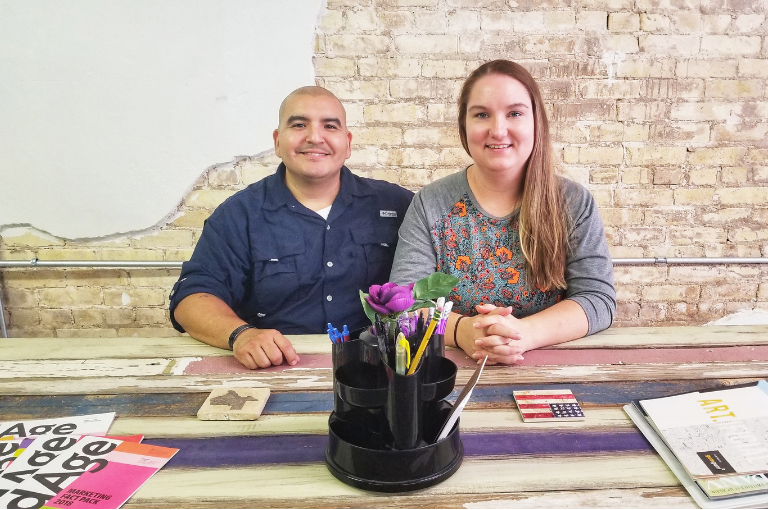 For Amy Morales at Kapeesh Marketing, it took a hurricane to help propel her and her husband’s business to its next stage of growth. After working from their home office for 4 years, the flooding waters of Harvey left the Morales family with a decimated home and home office: no walls, drywall removed, and cement floors.

Amy and her husband Vince worked like that for 6 months before funding through BCL of Texas helped them land a lease and later buy their own building in downtown Wharton. “You get comfortable in a home office. It was like a mama bird kicking us out of the nest — we had to fly,” Amy said. “BCL of Texas was there as safety net through it.”

BCL first worked with Kapeesh Marketing for a $15,000 disaster recovery grant through the Federal Home Loan Bank of Dallas, which allowed the business to replace furniture, supplies, and computer equipment and begin a lease in downtown Wharton. “That grant helped us stay afloat during that time,” Amy said.

When Amy and Vince found a building that they wanted to buy for their business’ long-term location, they reached out to BCL again. Now, they are getting ready to hire additional local staff as they expand into their new space.

Amy says that having their own office space with a downtown presence has established Kapeesh as a local business, as well as provided a confidence boost. “Unlocking that door and stepping inside and being able to welcome somebody into a space that’s your own is unbelievable,” she said.

“BCL of Texas took a chance on us and gave us some great advice along the way,” Amy said. She suggests that other business owners who may have heard “no” from family, friends, or other lenders get in touch with BCL. “Be confident in yourself and your plan and trust that BCL of Texas is going to do their best to work with you and help you grow your business,” she said.

As a nonprofit economic development organization, BCL’s mission is to grow the economy by supporting job growth. By working with growing local businesses like Kapeesh Marketing for small business lending and coaching, BCL has been able to create over 6,000 new jobs since our founding in 1990.